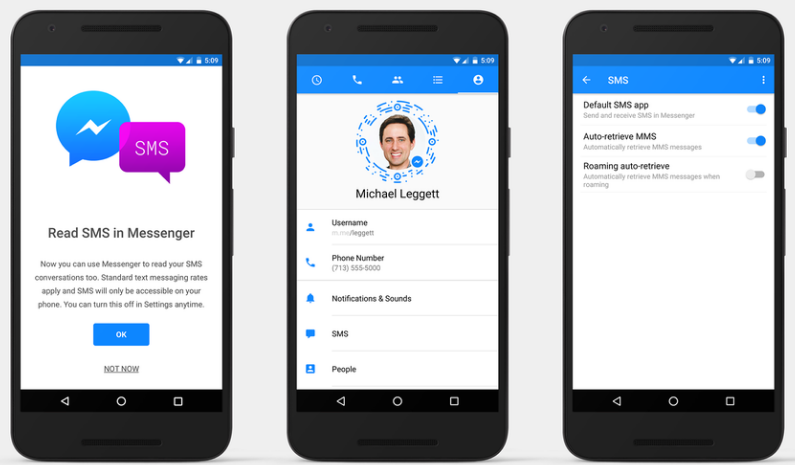 -
0
There is a good news for those who were tired of switching back & forth between Facebook Messenger & SMS on their Android as Facebook announced on Tuesday that its messenger will now allow Android users to sent text messages. It implies that the Facebook messenger app can now act as the default texting client for the Android users. Though for it doesn’t seems that Facebook has any plans of bringing it to iOS app but for the Android users the update is already available on the app. You can easily enable the feature via the “default SMS app” option in Messenger’s settings after which you’ll be able to view your text messages in Messenger alongside your Facebook chats. The best part is the SMS app will also support some of the Facebook’s “rich content,” that includes stickers, emoji, audio, photos and location information. However, there would be limitation on other Messenger features, like bots, GIFs, payments and third-party apps with the SMS app, unlike the messenger app. To distinguish between the two apps Facebook has used two different colors- blue for messenger and purple for the SMS app. Besides, the messenger icon can be viewed underneath the photo of friends who use it. In a Facebook post Tuesday, the company confirmed for the protection of user privacy and emphasized that using the app as a new default SMS client is optional.

“SMS in Messenger doesn’t send, upload or store your conversations on Facebook servers. Using this feature is your choice; you can easily switch to a different app as your primary SMS app from your device settings, or directly from the app that you want to make your primary SMS app.”