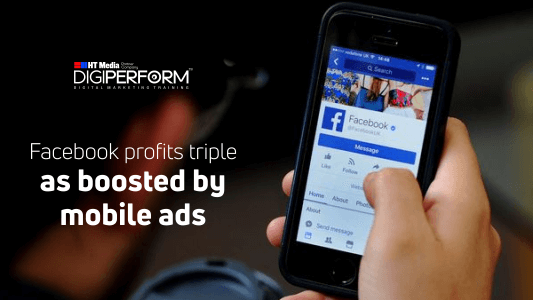 -
0
Having smashed the expectation mobile ads has led the Facebook profits get tripled in the first quarter from a year earlier to $1.51bn.  Earlier in 2012, there was no revenue from mobile for the social networking giant that now dominates the smartphone ad market. With a growth of 16 % the daily active users reached a mark of 1.1 billion on average in March of which almost 989 million are using mobile devices while the total revenue rose to $5.4bn from $3.5bn, which is an increase of 24%. Facebook clearly mentioned that the mobile ad revenue accounted more for the spike up. The revenues from advertising increased to $5.2bn, with more than 80% coming from mobile. It was not just the Facebook live videos that attracted new advertisers, but even the sales on existing services also grew. The figures of the first quarter has surpassed analysts’ forecasts in all the key metrics related to social network, also Instagram with a net profits of $1.5bn compared to over $500m in the same period last year. Facebook founder Mark Zuckerberg told investors:

“We had a great start to the year. We’re focused on our 10-year roadmap to give everyone in the world the power to share anything they want with anyone.”