Global e-commerce market is worth $22 trillion: A Report 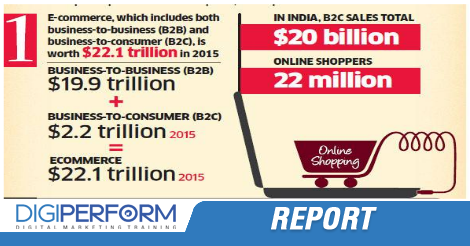 A recent study conducted by UNCTAD unveiled that the global ecommerce  market is worth around $22.1 trillion, including both business-to-business (B2B) and business-to-consumer (B2C), respectively valued at around $19.9 trillion and $2.2 trillion each. According to the UNCTAD data, China is the world’s largest business-to-consumer (B2C) ecommerce market, both in terms of sales and in number of online shoppers, followed by the US and Japan. The report also unveiled that Brazil, India, the Republic of Korea and the Russian Federation have come under the list of top 10 e-commerce markets with India being the 10th largest market in terms of buyers, followed by Brazil and Russia in per capita ecommerce spend. The report clearly depicts that the e-commerce is growing rapidly with emerging economies accounting for most of this growth. As per the report online commerce can help generate economic opportunities, including jobs by providing new opportunities & markets and that developing countries should take hold of the rapidly growing opportunity of electronic commerce (e-commerce) worth around $22.1 trillion in 2015, up 38 per cent from 2013, or they might risk falling quickly behind.
-
0
Share on Facebook Share on twitter