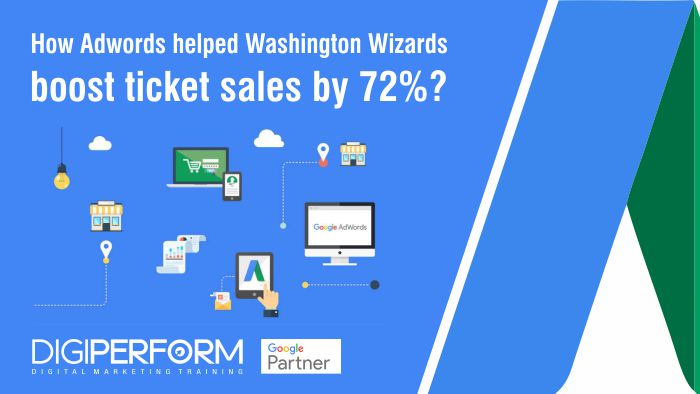 A sneak peek of the complete story:

The Brand: Washington Wizards Washinton Wizards’ objective behind using Google Adwords The team’s strategy for Google Adwords advertising The Success: 72% of ticket purchases consistently come from new fans via AdWords The Brand: Washington Wizards The Washington Wizards are an American professional basketball team based in Washington, D.C.. The Wizards compete in the National Basketball Association (NBA), as a member club of the league’s Eastern Conference Southeast Division. The team during the 2013-2014 NBA season made playoffs for the first time in five years and to capitalize on this success, the owner of the Wizards, Monumental Sports & Entertainment, planned to boost ticket sales and attract new fans in the in the mid-Atlantic region. To attain this goal, the team made use of Google Adwords for engaging new fans in the mid-Atlantic region and they paid their main attention towards the ticket pricing strategy on the most engaged AdWords campaigns that resulted in consistent 72% increase in the ticket sales.

The Washington Wizards were one of the big surprises of the 2013–14 NBA season, soaring into the playoffs for the first time in five years. Hoping to capitalize on the team’s success, Wizards’ owners, Monumental Sports & Entertainment, looked for ways to boost ticket sales and draw new fans. Prior to this past basketball season, the Wizards’ marketing efforts consisted of traditional print, websites, social media, local news and radio outlets. Now, the company wanted to attract new audiences in the mid-Atlantic region—beyond its existing fan base who typically attend games.

In order to develop the audience engagement, Monumental planned to utilize to Google AdWords. For the 2013–14 season, the advertising platform brought in 72% of the Wizards’ online spend and 25% of the brand’s overall marketing budget. Since, the budget was flexible; they could pay proper attention to the online investment on engaging new fans. “Google Search was a way to do that, because it was a channel that we had not been attacking historically,” said Josh Brickman, senior director of strategy and research at Monumental. Monumental also wanted to enhance the fan experience apart from thwarting the ticket sale scams from questionable online brokers. “When fans show up at the box office on a game night and try to scan their ticket and it doesn’t work, our hands are tied if they did not buy it from us. We wanted to take greater control of that issue moving into the new season,” Brickman said. While creating the strategy for its search campaigns, the company settled on not competing with the high-end ticket brokers for the most popular keywords. As an alternative, the team used specific terms in its AdWords ad extensions for encouraging customers to engage with the information in its search ads. For instance, a fan searching online for the Wizards’ schedule should see an ad with individual game match-ups customized to his or her interests. The outlook helped the team in better understanding the audience that is purchasing tickets.  “AdWords is showing us a truer representation of what transactions actually occur,” Brickman says. The new engagement insights also helped Monumental in overhauling its pricing strategy. The company tried to focus on better pricing for campaigns with higher engagement and for those with lower engagement; they were not doing it aggressively. The ad extensions strategy worked for them and their revenue saw a great spike up and the company became more visible to its online audience. In fact, the crows that Wizards drew post Christmas that was the second highest crowd of the season witnessed as to how successful the AdWords campaigns were.

The Success: 72% of ticket purchases consistently come from new fans via AdWords

“Just a simple Google AdWords ad drove more conversions than any other campaign that we offered,” notes Brickman.

The results were marvelous:

I got help in Astrology business with adwords