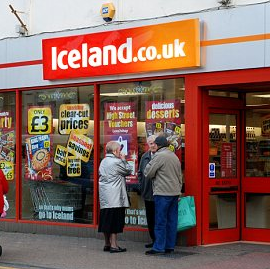 Iceland Foods Ltd. is a British supermarket chain that mainly sells frozen foods, including prepared meals and vegetables. They also sell non-frozen grocery items such as produce, meat, dairy, and dry goods. The supermarket chain launched a new brand positioning that it wanted to introduce to the public. The food brand turned to Facebook to achieve its objective and made use of video ads to promote “power of Frozen” campaign. The company was successful in driving sales amongst viewers who had interacted with them with retargeted ads and could achieve a spike up of 4.2% in online sales during direct response phase. Moreover, video ads and retargeted follow ups proved to be was 2.5 times more cost effective than TV for reach.

British frozen retail chain Iceland Foods Limited was launched in 1969 for the first time and since then the company has expanded to more than 850 stores throughout the UK. With emphasis on frozen foods, the supermarket chain has build up a unique position in the UK’s highly competitive retail sector. Renowned for value & convenience, the food brand wanted to prove that it stood for quality, taste, healthiness and environmental responsibility as well. The company launched its new brand positioning in 2015 that it wanted to introduce to the public. Iceland Food turned to Facebook to achieve this goal.

To achieve its goal of making the public aware of the new brand positioning, Iceland collaborated with the agency Ayima. The team created and launched a nationwide digital campaign for “The Power of Frozen” as a part of a much wider campaign that included TV and outdoor. The first thing that they targeted through video ads on Facebook was building brand awareness after which they worked towards driving sales amongst those who had interacted with them.

By making combined use of striking video ads with retargeted direct response ads, the brand repositioning campaign of the frozen food retailer helped the company in reaching a large audience and achieving a remarkable return on investment that too very cost effectively. It was not just reach & recall but the new campaign by Iceland created a buzz in terms of sales and return on investment as well. Facebook marketing helped the supermarket chain in achieving over 10% incremental reach on the TV campaign with a remarkable 95% on-target accuracy and that to 2.5 more cost-effectively. At the same time, ther was a significant increase in the ad recall increased that proved the campaign to be found memorable by Iceland’s target audience. After excelling in the first phase of building brand awareness, the company was could achieve similar success in the second phase of direct response as well. Based on the conversion lift test, it was unveiled that Facebook was accountable in boosting online sales by over 4%. Launched in May 2015, the 4-month campaign achieved:

“The success of the Power of Frozen campaign—and Facebook’s performance in driving brand awareness as well as direct response—has reinforced its importance in our marketing mix. Facebook is now a major business driver for us and I can only see this growing in the future.”