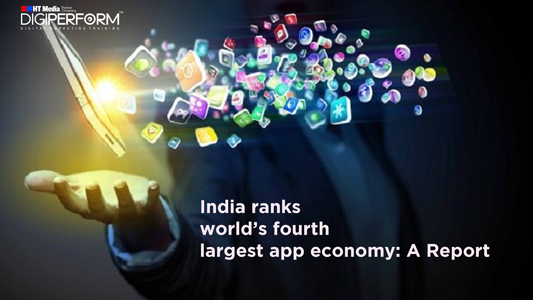 -
0
According to a recent report generated by a mobile-app analytics company App Annie India spots the fourth position among the largest app economies of the world.  The report also revealed about how there is dramatic increase in the amount of time Indians spend on apps. Talking about the total app downloads per year, only three countries are ahead of India and that are China, US & Brazil. The annual figure for India as per the report is estimated to grow by 92% to reach 7.7 billion downloads by the end of this year, and further to 20.1 billion by 2020. On the other hand app download in China is projected to grow at a much slower 29% this year; still the absolute figure will be 6 times more than that India at 49 billion. “With the introduction of affordable smartphones and better infrastructure supporting mobile, and given India’s population, the growth here is expected to be significant,” Junde Yu, MD of App Annie APAC, said. He also added that the main reason behind this growth is not the number of downloads but it is the amount of time users are spending on the mobile app. Looking at the data, the amount of time spent by Indians on apps in the first quarter of 2016 has increased by more than 2 times in comparison to that in the first quarter of 2014. When it comes to the retail apps, there is 11.5 times growth in the time spent during the same period, which is driven by e-commerce major players such as Flipkart-Myntra , Snapdeal and Amazon. YouTube and Hotstar are leading the way for the time spent on video streaming apps that grew by 7.4 times. Speaking to TOI, Yu said, “People have this perception in India that users spend more time on browsers. That is not true. Our data shows that the percentage of time spent on apps in India is the same as around the world, at 93% (the remaining 7% comes from mobile browsers).” The report also unveiled that more than 25% of Android users in India use at least one ride-sharing app such as Taxiforsure, Ola, Uber & so on. In fact, this is a figure that was the highest among all countries including the US, UK, and Brazil that has this figure below 20%. “This was a little surprising. But I think India is a developing country so the users are finding the need to use these transport services more,” Yu said. Among ride-sharing apps, Ola is the most used and downloaded app, followed by Uber. The most remarkable point is that while in retail the e-tailing firms that have a mobile-first approach, were found to be leading the way , the brick-and- mortar and web-first players in mature markets still have a big share. “Close to 75% of the top 10 mobile retail apps in India in both iOS and Google Play store have a mobile-first approach. In the US and UK, this number is only 10%,” Yu said. The report also revealed that Asia Pacific is the biggest region in the global app economy, accounting for 50% of total global app downloads. Source: TOI
Share on Facebook Share on twitter