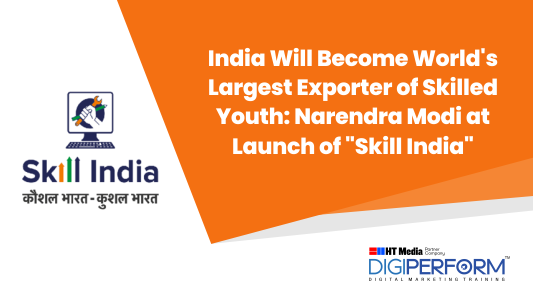 -
0
Prime Minister Narendra Modi freshly launched a one of his dream schemes “ Pradhan Mantri Kaushal Vikas Yojana” and national skill development agency” that aims to teach or make large number of people & youth skilled in some kind of work so that they may get jobs easily. He explicitly said that this scheme is an extension of previous schemes ” Digital India” and “Make in India” which were also aimed to make working system of entire country Digital and produce more entrepreneurs.

And in order to make digital India a reality, it is preeminent that country’s digital literacy goes up. Unless they don’t know the rigging of digital platforms and how to use them effectively, digital India will remain a dream or a scheme for the country as well as PM. He also said that both “Digital India” and “Skill India” schemes are interrelated to each other. In other words so as to establish India as digital country we need to train or literate people about digital mediums, and in doing so youth not only get skilled themselves but makes latter scheme a success as well.

Prime Minister also accentuated that in order to deal with international challenges, we need to impart definite trainings such as social media optimization, search engine optimization, online selling, manufacturing and any other kind of skill to youth so that they gain confidence. The Prime Minister said that to emancipate or liberate underprivileged youth we have to impart them with variant skills. And once the skill is acquired, confidence increases, also the probability of taking risk increases, it further reinforce entrepreneurship. From the day one of taking oath as a Prime Minister, Narendra Modi said seeing India as Skilled is not a scheme, it is a dream that don’t let me to sleep. This scheme is a step towards achieving it and under this we will teach about 50 crore by 2020. Today where technology plays a vital role in our lives, so by rendering different sorts of specific digital media training each individual will take up step ahead to bridge the gap of skilled and unskilled. On the occasion Finance Minister Shri Arun Jaitely said that whole world is fascinated by India development story and because of digital media we could produce so many entrepreneurs in such a mean time. And seeing the intensification  of digital media India will produce more e-commerce entrepreneurs as well. Taking a dig a congress, he said that in just years, so many young entrepreneurs have set up their own online business and four years are still left. Prime Minister also said in future India will turn out to be a world’s largest exporter of skilled manpower or an employees. The Prime Minister called to modernization of training programmes and curriculum to make sure that the youngsters are familiar to newest technology and happenings in digital media. Because at present 10% of total population is skilled, whereas Korea and japan 96% and 80% respectively.

Hence through these schemes India objective is to make majority of population skilled so that could meet up employers expectation and induce economic expansion. Prime Minister’s Skill India scheme is somehow allied to Make In India campaign, which intended to increases the manufacturing growth of the country. Currently

So, however, it is expected that schemes like Make in India, Skill India and Digital India have induced growth since the launch, and further reinforce the growth story of India and instill feeling of optimism amongst people of the country. In addition, Many leading companies CEO like Microsoft, Reliance, Amazon and Facebook have joined hands with the vision of beloved Prime Minister Narendra Modi.

Which Skill Will Help You Get Lucrative Job In Future?

With 2015, the population of  the world have crossed the mark 7 billion, out of that 3 billion people are active users of internet. And more than 2 billion people have accounts on social media sites. As smart phone penetration is growing up, it would be the hottest destination for marketing and advertising.

Digital Marketing Industry will be about 3,575 crores by 2015, so those who acquire the digital marketing skill will be able to get job with ease and have dream career ahead.

As per the data released job portals like Naukri.com, Shine, Times jobs and Monster, jobs in specific areas or branch of digital marketing is given below.