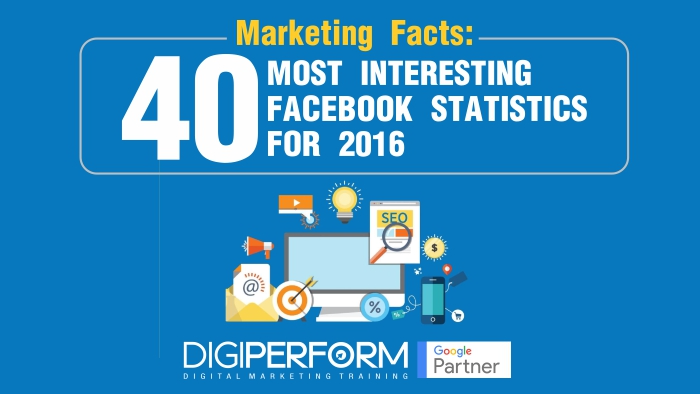 With Facebook becoming a crucial component of your marketing strategy for engaging with fans and customers, you can’t just simply launch a page on Facebook and hope the customers to find you. Hoping for something was never a strategy in marketing and that you need to create a blueprint for how you are going to achieve what you wish to. And! For creating a blueprint for Facebook marketing, you should be well acquainted with the statistics that are related to it.

Here are 40 interesting and important statistics related to Facebook for 2016:

1) Facebook was launched on February 4, 2004, by MarkZuckerberg and his Harvard College roommates

3) Originally only open to Harvard students. In March 2004, Facebook expanded to the universities of Columbia, Stanford, and Yale. It later gradually opens to most universities in the United States and Canada.

4) On september 26, 2006 Facebook was opened to everyone at least 13 years old with a valid email address

7) Facebook is now the fifth-most-valuable public company in the world. Its market value is around $321 billion.

8) Since 2012, it has spent more than $25billion buying competitors such as Instagram, WhatsApp and Oculus

10) Mark Zuckerberg’s salary is only $1 a year, which isn’t really a problem when your net worth is $48.9 billion

11) There are 1.65 billion monthly active users

15) 83% of parents on Facebook are friends with their children

20) Half of internet users who do not use Facebook Themselves Live With someone who does, of those, 24% say that they look at posts or photos on that Person’s account

26) Hive is Facebook’s data warehose, with 300 petabytes of data

31) There are 50 million active small business Pages, but only 2.5 million of those businesses pay to be ‘active advertisers’; although 75% of brands will pay to promote posts

34) Average advert click through rate on Facebook is 0.9%, although adding a CTA button can lift click-through-rate by 2.85 times

38) Videos earn the highest rate of engagement, despite only making up 3% of content

40) Posts published on Thursday and Friday receive the highest engagement