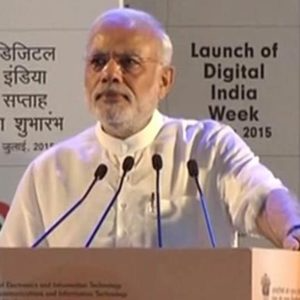 With the vision to spread awareness about the Digital India programme,  Prime Minister Narendra Modi recently visited Silicon valley, the place that is known heaven for startups and technology businesses. The prime objective was to make leading technology companies and NRIs aware that how is India best place to start business? Or why should invest in India right away? Or how can everyone be connected with internet in India?
Before talking about the outcomes of Modi’s silicon valley visit let us first discuss what is digital India programme?
Initiated on 1st July this year by Prime Minister Narendra Modi for bringing up transparency in governance and it could possible only when each individual are connected with internet. However, with only digital technology, internet and digital awareness the discrepancy in daily routine work of government may end. On the other hand, there are three prime rationale behind the digital India-first, do away with corruption. Second, teach or create understanding amongst large people about digital mediums so that they get familiar with these channels and thus use effectually. Third, is to build digital infrastructure. It is through digital media the real democracy establishes.

In Silicon Valley of California Digital India Programme was supported by top digital tech honchos like Mark Zuckerberg of Facebook, Sundar Pichai of Google, Bill Gates and Satya Nadella, Microsoft, and Shantanu Narayen of  Adobe systems, Tim, CEO Apple and Paul Jacobs of Qualcomm.
The whole concept of Digital India impressed Tim Cook, a Apple CEO a lot and he profoundly expressed his desire to be associated with this programme.  He explicitly stated that it would certainly be a game changer for India. If everything goes smoothly then Apply pay would be using for Pradhan Mantri Jan Dhan Yojna.

The Google new CEO, Sundar Pichai has pronounced to make 400 railway stations a WiFi enabled by end of 2016 and people would be seeking out any information on web and connect with the world as a result.

With taking ahead the legacy of Bill Gates working in India, current CEO of Microsoft, Satya Nadella avowed that the company will help set up low-cost internet technology to rural areas of India.

Youngest Billionaire, Mark Zuckerberg, Facebook founder also to extend his support to Digital India programme, and before having interaction with Prime Minister Narendra Modi Facebook changed his profile picture. However later the picture created a controversy and seen as an attempt to popularize or gain support for Internet.org.