Snapdeal once again strikes an emotional chord with #DilKiDeal 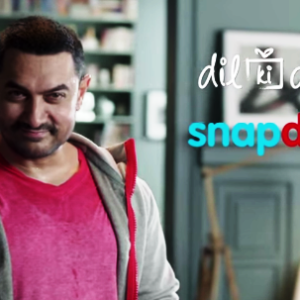 -
0
One of the leading Ecommerce brands in India, Snapdeal once again tries to get into people’s heart with its #DilKiDeal Campaign. Conceptualised by Leo Burnett, this campaign makes a shift from the earlier communications, which were more focussed on tangible benefits offered by the platform. This new campaign is a step ahead in its communication journey while stressing more on the emotional fulfilment of its consumers. The theme of this campaign revolves around the idea that online transactions are not just value for money deals, but also ways to show someone you care for them. A new change to this campaign is the introduction of a brand ambassador. The ad commercials feature Aamir Khan as an observer, onlooker and also a consumer himself. He has been roped in with the vision to strengthen the brand philosophy of creating life changing experiences for buyers and sellers by helping them meet their aspirations and fulfilling their dreams. #DilKiDeal Extended on Social Media! Launching this campaign on Social Media has created a great buzz among the audience. Simple contests on Facebook and Twitter drove video views. In just 7 days time, the ad commercial has got 482,619 views With the introduction of this campaign, Snapdeal hopes to growth the number of buyers and sellers on their platform. They want to transform every delivery box as a box full of wishes as shopping for loved ones can be a very emotional and fulfilling experience. Are Experts really thrilled with the creative outcome? The news value revolving around the entire campaign is just superb. From selecting a brand ambassador to creating a connecting hashtag, Snapdeal emerges as a clear winner in this. However, looking at the ad film, it feels that the creative line of the story is singing the same old song that one associates with an Ecommerce brand. In fact, their previous Diwali and the Yumdood campaign was designed on the similar route of brand messaging where they highlighted the mix of both services and deals. Snapdeal, however disburses these charges saying that the campaign marks a shift from its earlier communications which were more about the value that a customer derives by shopping on the platform. Keeping that tangible benefit alive, the brand is elevating its positioning to build an ecommerce connect with its customers and the ‘Dil Ki Baat’ campaign is the first step in bringing this proposition alive. However, it seems that the experts are not really excited with the creative outcome of this campaign. Rajiv Dhingra, the founder and CEO of WATConsult says that the TVC is neither the most effective nor the most engaging ad he has come across. “After the first 5 seconds, it tends to become preachy and repetitive. They could have done something more exciting with Aamir Khan given that he is known for creative ads like Tata Sky and Godrej in the past.” He further adds that the brand overdid the branded box visuals without even weaving an emotional story. Moreover, he also added that Aamir in the video has a limited screen time and his new look doesn’t give a fresh or young appeal. Overall, it seems a failed attempt at leveraging a huge film star. Snapdeal hopeful with the Ad Although it seems that experts are not really thrilled with this campaign, but Snapdeal on the other hand is very hopeful with this newly launched campaign. Senior VP of Marketing at Snapdeal said that they truly believe in the power of emotions and are quite sure that with Aamir Khan as the face of this campaign, they will truly receive a warm uptake amongst their customers. Launched in 2010, Snapdeal has witnessed an applauding growth of 600% from 2013 to 2014 with majority of its orders coming from mobile phones. Witnessing it’s vision and growth, investors including Ratan Tata have partnered with the brand recently. Therefore, it is considered to be the right time for the brand to evolve in its communication strategy and appeal at an emotional level. As predicted by experts that Ecommerce will lead the Ad charge in 2015, we can expect more such campaigns with some of the leading names in the industry. Do you think will innovation in advertising become a tough ask for the category?
Share on Facebook Share on twitter