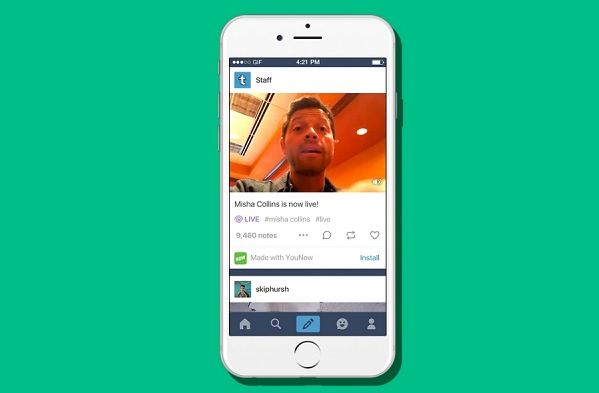 -
0
With an objective of capitalizing in the growing popularity of live streaming video, the Yahoo-owned firm, Tumblr has collaborated with YouTube to launch a live video streaming service such as Twitter’s Periscope and Facebook Live Video. The new tool will allow Tumblr users to live stream video directly to their followers’ Dashboards. The tool will also show push notifications to the users who go live or reblog a live stream. However, the new service will not function as a standalone app like Facebook Live Video.  Tumblr is integrating with existing services – including YouTube, Upclose, Kanvas and YouNow – and then using itself as the publishing and discovery platform for those streams. At launch, Tumblr has teamed up with several media partners & organizations to live stream dedicated content & events during the launch. While the videos are live, they will be pinned in first position at the top of the user’s followers’ Dashboards on web and mobile. With the help of the badge that’s there on every live video post indicating the provider, the app will be opened or the users will be taken to the app store to install the app.
Social Media Marketing
Share on Facebook Share on twitter