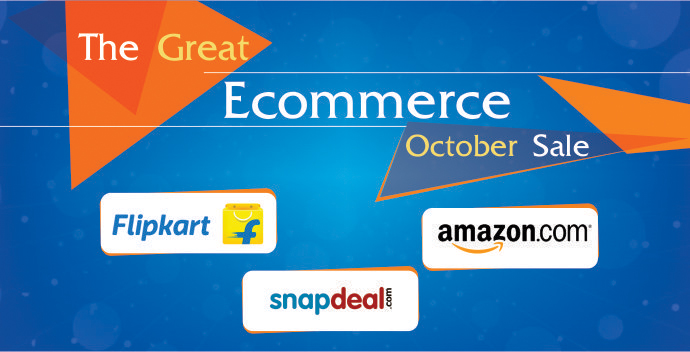 -
0
With the festive season gradually reaching its climax, the biggest ecommerce players in India are working harder and getting smarter to launch their annual Big Billion Day (BBD) sale events. As apparent from the past years, the last quarter that’s between October and December is believed to generate a big chunk of sales due to the festive season, whether it is for online or the offline retailers. Well-aware with the fact, the e-retailing giants such as Flipkart, Amazon and Snapdeal are all set to compete high against each other and make it to the top, especially keeping the dwindling sales in recent quarters in mind. May be they are following different ways for accomplishing higher and better sales, but whatever they could be, each of those carry a big bunch of lessons for every marketer mainly those into the e-retailing sector. So, let’s have a look one by one as to how these big ecommerce players are trying to capture the biggest part of the customer base by grabbing the attention of the customers for their flagship sale events throughout this festive season?

India’s largest online marketplace firm, Flipkart launched its Great Festive Sale offer on 3 October. However, according to a media report released in July, the ecommerce company wanted to hold its BBD sale for 15-16 October, before it actually settled on preponing it to the first week of October. Looking at the previous years, Flipkart held its shopping festival last year on five consecutive days between 13-17 October during which it sold goods worth $300 million however the e-retailing giant sold goods worth $100 million in the preceding year in its one-day event. As per the report, Flipkart is said to have spend almost Rs 30 crore on marketing & advertising for encouraging its customers for this year’s Big Billion Day sale. However, another report had predicted that Flipkart might face severe fund crisis this year due to its discount offers & acquisition of companies. In fact, as admitted by a Flipkart executive, there was indeed a pressure to cut costs. As usual, the ecommerce major built exclusive tie-ups with major brands as well as offered EMIs on products for large customers. It also came out with its Re 1 offer even this year, which was greatly successful in 2014. The noteworthy point is that with Amazon already overtaken the company; this festive season was really very challenging for Flipkart according to several industry reports. According to a recent report published by ET, Flipkart had a bunch of initiatives in its list to be taken for its over 1 lakh seller base. The company also wanted to offer incentives for best-performing sellers such as low-cost loans for them via tie-up with State Bank of India apart from providing support at packaging, pick-up and delivery, as per the report. Moreover, as per another report Flipkart was also looking to add temporary 10,000 odd staff for helping its sellers in coping up with the additional burden during the dale. The company also included its fashion unit Myntra that has already acquired rival Jabong in July, for participating in this BBD sale event.

In order to leave no stone unturned, the US online retail giant, Amazon, is all geared up for its BBD sale event this year, to give a tough completion to Flipkart in the race that has already been going around between the two in the last one year or so. The report by the Economic Times also revealed that Amazon’s budget for marketing & advertising for its BBD sale was almost two-three times more than that of Flipkart. With a budget of around Rs 125-130 crore, Amazon ran its BBD sale between 1-5 Octobers, this year. “We remain committed to ensuring that our customers get the most exciting and widespread offers and selections,” the ET report said quoting an Amazon India spokesperson prior the BBD Sale event. Like Flipkart, Amazon has no plans compromising on presenting higher incentives in comparison to last year for its sellers and that they will award the best-performing sellers handsomely, as per report. Amazon was believed to face major challenges in fashion & mobile categories from Flipkart according to the experts, as the latter acquiring Jabong a few months back as well as entering into exclusive deals with top mobile brands has almost changed the game. Though it’s for Indian market, the US ecommerce giant is following its US strategy by aggressively spending during the festive season like that of the Christmas. The US parent is said to recently complete its sale event held between 8-12 September. Founder and CEO Jeff Bezos announced in June about the company’s $3 billion commitment for its Indian operations, which is over and above the $2 billion that company invested in the country in 2014. The big investment of fund has made Amazon India to focus more on customer acquisition and the improvement of the service quality.

With an aim of attracting the next 100 million potential online shoppers, the e-commerce major, Snapdeal is said to have invested Rs 200 crore solely for its rebranding activities apart from unveiling a new logo. “There are 50-60 million online buyers in India currently and for e-commerce to become larger, the next 300-400 million people coming online would be very important… Things like discounts, fast shipping, functional benefits are already there, but going ahead, e-commerce brands will have to stand for something of a higher order,” Snapdeal Co-Founder and Chief Executive Officer Kunal Bahl said. Apart from re-positioning its brand before the festive season, the online marketplace, like its competitors Flipkart and Amazon, is working smart with offers that can attract customers to shop on its platform. Snapdeal is hoping to create an excitement with its changed logo but it will work as long as there is a story woven around that change, said Harminder Sahni, Founder and Managing Editor of Wazir Advisors, a consulting firm to Firstpost.

The Ecommerce Sector: An Outlook

Kotak Institutional equities recently released a report that unveiled about how the Indian e-tailing market could reach $28 billion by 2019-20, with an overall annual growth rate of 45% over the next four years. Although the growth estimates are high, the sector saw a drop in the gross merchandise value in the June quarter by that of 7% to $13 billion in comparison to 21% rise to $11.5 billion in the same quarter last year. In comparison, China had a retail market of around $650 billion in 2015 and is expected to be worth $10.3 trillion by 2018, compared with the $5 trillion in sales projected for North America, according to a PwC report.
FMCG
Share on Facebook Share on twitter