The 3 Take-Aways for Every Marketer from Pokémon Go 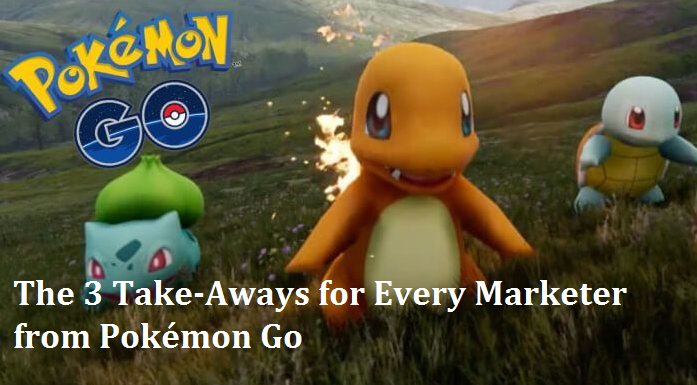 -
0
So, have you heard of Pokémon Go? I won’t say have you played Pokémon Go because I know a lot of you have not played the game due to very busy life however you must be longing to! In fact I know a lot of people who are yet not aware of the game! They have just heard Pokémon Go and wondering as to what is this! Some think it’s a bad virus while some think of course expect it to be nothing other than a game! Well! It’s about those who either are too busy to read/ watch the news or selective about reading/ watching news! Pokémon Go is a free-to-play, location-based augmented reality game developed by Niantic for iOS and Android devices. It was initially released in selected countries in July 2016. However most of you who embarking upon this article I think must be aware of the game- Pokémon Go! No wonders! The game is anyway the talk of the town! And! All those who know Pokémon Go must be rather wondering to know more about it, more about why the game has seen a phenomenal success overnight! I mean this is what people are talking about! Ask this from people belonging to the gaming companies as to how they feel about the release of this new game that has taken away their piece of mind by occupying much of the time of the young people who were playing other games. However, at the same time, the game has preached us mainly business owners and marketers with some incredible lessons. Let’s have a quick look to these lessons from our all-so-favorite game of at present – Pokémon Go.

Take-Away#1: Even the overnight successes are not overnight!

Have you heard of the Pokémon Joke cracked by its creator that it took him 20 years to become an overnight success? Haha! 😀 This is what! For a layman it could be an overnight success but those who are in the game must know how long it actually has taken! May be it’s the new idea that became Pokémon Go but remember it always that new idea no matter whether it takes 5 years or 10 years to pop up in your mind! So, the idea behind talking all this is –‘Relax and do your work with all the zeal that you can!’ Be patient! There isn’t anything like overnight success actually! So, if you are not making one don’t get disheartened as after some years you might make one…I mean an overnight success! J However! IF! You are not getting blown away with the time or the circumstances and are consistent & steady in your efforts apart from being innovative and creative! Moreover, Rome was not built in a day!! 🙂

Take-Away#2: Don’t underestimate the power of a common businessman!

I know these big companies like Nintendo & Pokémon are quite huge & respectable brands! It’s not that they have come out of nowhere all of a sudden but the huge success they experience with the new release of game is all because they tried to be a little innovative. They tried to do something different! In spite of being such big brands they did not hesitate in collaborating with a budding company like a start would easily do! If you look at the Pokémon Go game show and if you look at the entire artificial reality, the entire virtual reality, geo maps of Google etc, you will grasp about the Pokémon approach and the frame of mind the creators of the game have! How, they have approached even the newbies and taken help of the freshers in the field for making the game a little different and creating something more interesting. It’s nothing wrong in stooping down a bit, thinking yourself as a start-up, dealing with the hurdles, making right collaborations for the requirement with anybody who can help and at end applying of years-old experience & insights! So, if you are running a business, don’t let your success let you down because you could not oversee the actual hurdles from the top. Be on your knees and think wise! After all your business is one of your most loyal partners! Don’t take it for granted unknowingly! Keep hunting for things that can make you shine!

Take-Away#3: Don’t be too rigid to change no matter what!

Exactly! Don’t be too rigid with something irrespective of whether it never lasted as you might embark upon something even bigger & better! Nintendo & Pokémon are some of the industry rulers still the so-called-overnight success they have witnessed due to Pokémon Go had one more reasons behind and that was the shift in the way they were working! The company that had always charged money upfront before offering the game has for the first time released a game that mainly works towards building the brand and making it more powerful than ever. And! Anyway! At the end of the day the gae is successful for them in all the ways! May be the model that you started your business with worked fine and still working fine for you but that doesn’t mean you cannot have a better model or say a more productive model! This is what! Always be ready to adapt & change though relevantly! 🙂

Play this game if you can squeeze some time out of your busy schedule! It’s interesting! 🙂 😀 The bottom-line! Apply what you have learnt from the game Pokémon Go to your marketing!