Asia Pacific now accounts for 50% of all internet users: A Report 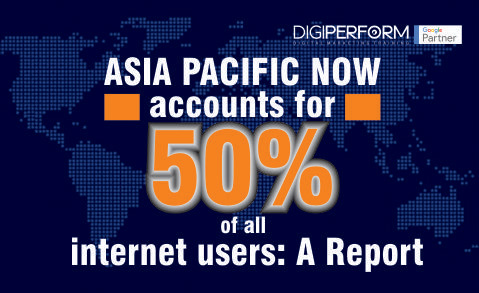 According to a new research conducted by We Are Social, the Asia-Pacific region has exhibited a remarkable growth in terms of the web audience with an increase of 20% in just 18 months.
Digital in APAC 2016 from We Are Social Singapore
The report generated by the Social Media Marketing Company also revealed that there is also a whopping 50% increase in the number of people using social media from mobile devices. This is in comparison to the average global growth of 19% and 39% respectively for the same measures.

Major Facts & Stats related to the digital connectivity in APAC:

Asia Pacific (APAC, which has now become abode to more than half of the world’s internet users, still lags on all the report’s connectivity measures except for mobile social media use but based on share of population.

However, in spite of this lag the speeding up of mobile adoption around the region is the main reason behind the optimism, particularly in APAC’s more ‘developing’ economies. But then, as given below, there still remain some areas for concern mainly in terms of equality of access. One of the most remarkable points is that the massive growth in digital use around APAC over recent months has been driven mostly by a handful of countries making it worth examining the individual data points for the right context and the insight. Source: We Are Social
-
0
Share on Facebook Share on twitter