Global mobile ad revenue consistently accelerating with an increase of €37bn in 2015: A Report 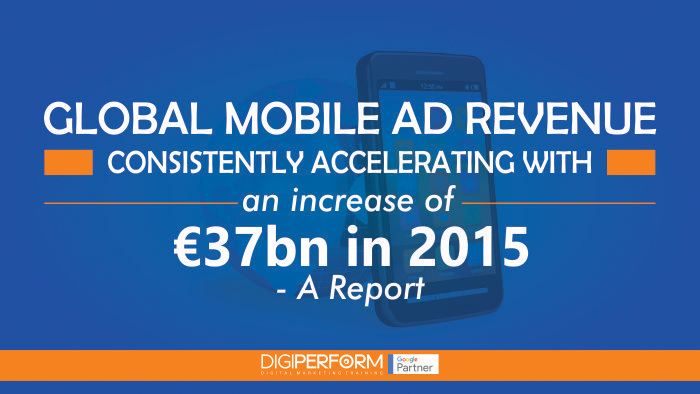 -
0
According to a recent report released by IAB Europe and HIS, mobile advertising growth was increased by 68.2% to €37bn ($49bn) in 2015 from €22bn ($29bn) in 2014 and continues to accelerate driven by mainly two factors that include a mobile first consumer world and the progressing marketing technologies. The IAB Europe & IHS study also revealed that growing by an exponential 92.6% to €19 billion ($26 billion), the mobile display continues to improve faster than search. The findings from IAB Europe & IHS also emphasized on how mobile display is constantly driving investment with the highest growth at 92.6% leaving the mobile search behind with 51.8%. With the users consistently migrating from operator-owned messaging services to app-based messaging platforms, there is a 20% growth in messaging. With display accounting for more than half of all mobile spend globally with a 52.3% share at €19bn ($26bn), search took only 42.8% share at €16bn ($21bn) in 2015. As far as messaging’s share is concerned, it is constantly declining with a 5% share at €2bn ($2.4bn). Highlights of the share by region of the global figure of €37bn ($49bn) for 2015 is: The most remarkable point is that with a 69% leap in 2015, the year-over-year growth was led by APAC. In fact, as per the report all the regions excluding Middle East and Africa grew by over 50%: Townsend Feehan, CEO of IAB Europe said: “The Global Mobile Advertising revenue numbers demonstrate that the channel is a key driver in the evolution of digital advertising and the growth of display confirms the importance of mobile for brand advertisers to reach their consumers. It is key for advertisers, agencies and publishers to have a cohesive view of the customer journey and mobile is playing an increasing role in that.” “These global figures reflect brands’ recognition that mobile is a critical platform for reaching today’s consumers,” said Anna Bager, Senior Vice President and General Manager, Mobile and Video, IAB. “We’ve experienced skyrocketing growth for mobile advertising in the U.S. – a 66 percent upswing year-over-year from 2014 to 2015 – and considering the small screen’s power to reach audiences, it is unsurprising to see an upward trajectory the world over.” “The research shows that mobile is becoming the key channel for advertisers to reach their consumers and continues to evolve the online advertising market. These numbers have been underpinned by the industry coming together to collaborate and create improvements to mobile advertising infrastructure”, said Daniel Knapp, Senior Director Advertising Research, IHS. “Access to improvements in technology, measurement and creatives are helping advertisers use mobile as a channel for brand advertising.”
Share on Facebook Share on twitter