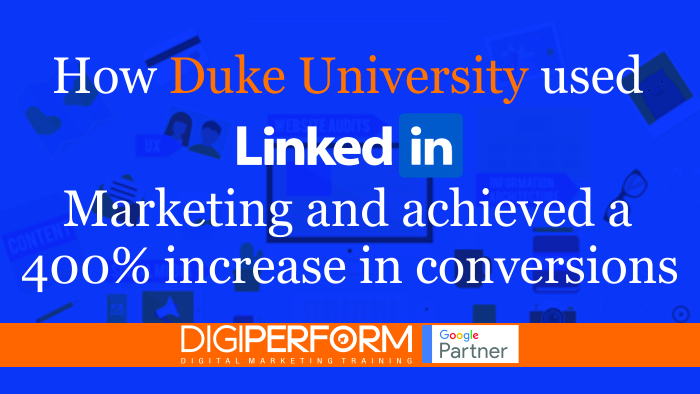 A private research university located in Durham, North Carolina, United States, Duke University was founded by Methodists and Quakers in the present-day town of Trinity in 1838. The school however moved to Durham in 1892. The university’s campus spans over 8,600 acres (3,500 hectares) on three neighboring campuses in Durham including a marine lab in Beaufort.

Duke University had three main challenges that were identifying the qualified prospects for its unique MBA program in target global regions including India, Russia, and Latin America, educating the prospects on program’s unique value proposition and encouraging email signups for requesting more information. The brand made use of Sponsored InMails targeted by seniority, geography, & degree and could exhibit an open rate of 68% and a 400% increase in conversions with a cost per lead of 10% less than other channels as well as 300% increase in sales pipeline closure speed.

Cross Continent MBA program by Duke University has a unique value proposition that was not easy to be conveyed through the traditional ad formats. “Recruiting working professionals into our global programs has always been a challenge, because our concept is that you continue in role while earning a world-class MBA,” says Elizabeth Hogan, associate dean for global marketing at Duke. “Yet when high-potential professionals in emerging markets think about business school, they assume it involves quitting their jobs to do an MBA program in another country, or attending a local school in the evenings or on weekends.” Though, the university was getting majority of applications to the program through word-of-mouth referrals, it wanted to market the program to the new prospects in different global regions who otherwise won’t have learned about it. Having realized the potential of LinkedIn marketing Duke’s marketing team turned to it for targeting the ideal candidates all over the globe. “LinkedIn is a professional network for people who are interested in furthering their career, which is a natural fit for people who are interested in developing their careers through an MBA program,” says Hogan. Through LinkedIn’s InMail solution they got the ideal method for explaining their program’s feature. Now, they could deliver a detailed email message explaining the program’s features and including a call-to-action for prospects to sign up for information. Once, they received the information from visitors, their admissions counselors then followed up with qualified prospects for encouraging the program applications. “This campaign gave us an opportunity to target the right people and make them aware of this program, and it was phenomenally successful,” Hogan adds.

A longtime LinkedIn customer, Duke had anyway used Sponsored InMails successfully in the past however the productivity of the its most recent campaign went far beyond all of their expectations. The main benefits of the most recent campaign and numerous upgrading to Sponsored InMail tool for Duke included: The changes that the Duke team made led to a significant impact on Duke’s campaign performance lifting the conversions in certain regions by even 400%. In 2013, Duke generated 150 leads from a spend of $10,000 on an InMail program in Russia. “This time, we’re spending half as much in that region and have had twice as many leads,” says Hogan.

If you talk about this MBA program, the time between a prospective student expressing interest and he / she enrolling was little too longer that of approximately 18 months however the brand could overcome this concern with the hep of LinkedIn Sponsored InMails. But thanks to the recent InMail campaign, says Hogan, “we have two students starting in August who had never heard of this program when they received our InMail in March. In the history of my marketing experience at this school, I’ve never seen us convert that quickly.” Though, it was not for the first time that Duke had experimented with a variety including Sponsored InMails for promoting the Cross-Continent MBA program, they never saw such stellar results before. According to Hogan along with the LinkedIn Sponsored InMail platform’s upgraded delivery & optimization features it was her team’s focus on continually analyzing results for optimizing the messaging & targeting activities in order to improve the outcomes. “My mantra is that whatever experiments you run, be rigorous in tracking them so your organization can learn lessons from year after year and campaign after campaign,” says Hogan.

“One of the extraordinary things about this InMail campaign is that we have two students starting in August who had never heard of this program when they received our InMail in March. In the history of my marketing experience at this school, I’ve never seen us convert that quickly.”