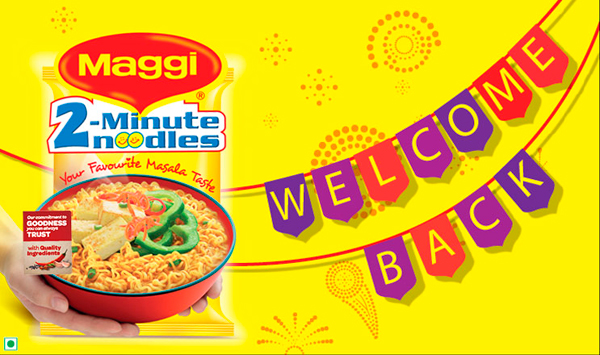 Read this case study to know how Nestlé Maggi used multiple digital channels to cope up with the situation after Food safety administration (FDA) of India ordered the company to recall its popular 2-minute Maggi noodles at the end of May 2015 when tests showed the product to contain high levels of lead and MSG.  Company: Nestlé Maggi Industry:  Food & Baverage Tool Used: Social Media Marketing Result: 21% Improvement in Conversion Business Type: B2 C

Nestlé is a Swiss transnational food and beverage company headquartered in Vevey, Vaud, Switzerland. It is the largest food company in the world measured by revenues,and ranked #72 on the Fortune Global 500 in 2014.

Nestlé India was ordered by Indian food inspectors to recall a batch of Maggi Noodles from the northern Indian state of Uttar Pradesh due to the claim that tests have found Maggi instant noodles ‘unsafe and hazardous’ and that the food & beverage company was accused of failing to comply with food safety law.

Initially the global food & Baverage Company rejected the accusation that the Maggi noodles were unsafe and they announced on their website and social media outlets that there are no orders to recall any products.

“The quality and safety of our products are the top priorities for our Company. We have in place strict food safety and quality controls at out Maggi factories… We do not add MSG to Maggi Noodles, and glutamate, if present, may come from naturally occurring sources. We are surprised with the content supposedly found in the sample as we monitor the lead content regularly as a part of the regulatory requirements.”

1st June – Nestlé re-assured customers that its noodles are safe

Nestlé consistently shared the updates on the investigation into the safety of Maggi noodles in India with the customers through Maggi noodles’s official India Facebook page, Twitter and website. The food & baverage company announced on these platforms that according to the extensive testing there is no excess lead in Maggi noodles.

On its twitter & Facebook page, the food & baverage company interacted with the customers, answered their questions about the levels of MSG & lead found in their noodles and thanked them for their support. The company consistently reassured customers about the safety of the noodles and that they are a transparent company. They updated the customer on how closely they are working with authorities in India for resolving the issue as soon as possible. The company also explained the science behind the tests as to what lead & MSG giving an informative breakdown of the ingredients in their product at the same time. @MaggiIndia made a remarkable effort in responding to every tweet from customers on this issue with a well thought-out statement that explained how lead occurs naturally in soil and water.

Apart from consistently engaging with customers in an active dialogue on social media channels such as Facebook and Twitter, Nestlé also created a FAQ page on its official website for answering all questions. FYI: tweet – retweeted 846 times:

After the brand reassured the customers that its noodles are safe, it did a U-turn and settled on recalling Maggi noodles produced in India. Nestlé CEO Paul Bulcke said while speaking to the media “We are working with authorities to clarify the situation and in the meantime Nestlé will be withdrawing Maggi noodles from shelves.” The food & baverage company finally chose to destroy more than £32million ($50million) worth of Maggi Noodles in India when they were considered unsafe by regulators.

After the food safety panic in India Maggi noodles was tested in other parts of the world for reassuring the consumers that they are safe. Tests in UK declared that the levels of lead in the product are within EU levels followed by tests Canada that as well cleared Maggi noodles as safe.

The Summary: How social media helped in damage limitation?

When FDA in India deemed Maggi noodles, one of Nestlé’s top products unsafe, everyone was waiting for Nestlé response as to how would they manage the situation? In the beginning the food & baverage company defended its product through various digital channels rejecting all claims that its noodles were unsafe. Through social media that included Facebook and multiple Twitter accounts (main Nestlé account, Nestlé India, Maggi India) Nestlé reassured customers that its product is safe. The company tried responding to each & every comment on social media directly. They even created a section on their main website for sharing updates with the customers consistently. However, due to the pressure that grew on the global company, Nestlé’s CEO announced in a press conference that they will withdraw all Maggi noodles in India from shelves for complying with the regulators. Again through digital channels Nestlé explained the customers as to why this decision was made and answered all their questions. The company also elucidated the science behind the reason for the ban in simple terms to make the customers understand. The panic was a big shock for the company that had been selling its Maggi products for over three decades in India covering 80% of the country’s instant noodle market. However, the brand made smart use of digital channels mainly social media to manage the crisis and limited further damage by informing, updating and reassuring the customers to give confidence to them to continue buying the noodles in the future.

It was undoubtedly a difficult summer for Nestlé India however it was just the summer as very soon the company received some positive news when an Indian government approved laboratory found that Maggi noodles in fact complied with national food safety standards. The FSSIA (Food Safety and Standards Authority of India) was slammed by India’s food minister for creating an environment of panic in the food industry. In the mean time, Maggi noodles were cleared in many foreign countries; Nestlé received permission from the Bombay High Court as well for exporting Indian Maggi noodles.
FMCG
Share on Facebook Share on twitter