The Business Talk: 4 Take-Aways from the Yahoo Sale to Verizon 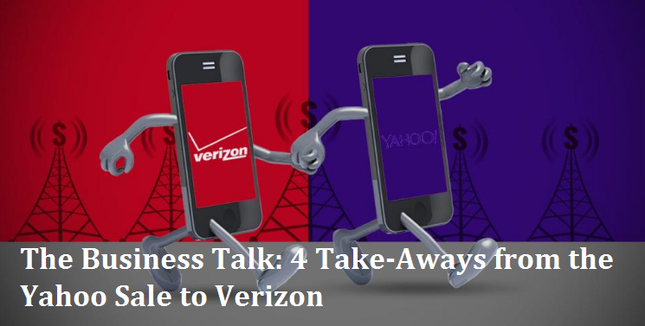 -
1
A sad & disappointing news though, Yahoo’s acquisition by Verizon for barely $4.83-billion is a treasure of lessons for a number of business owners around the world on where the fate can take your business if things are not conducted the right way. I mean a company that spotted the #1 position in terms of unique visitor (196.5 million) in July 2013 and closely inched out the tech giant Google respectively, a company that refused to be sold for a whopping bid amount of $44.6 billion by Microsoft, was sold for a few pennies. I know it’s sad for a lot of us but while the acquisition shocked a lot of people around the world, there are a few very valuable take-aways that can help many brand to thwart any such situation in future. So, let’s have a look to a few take-aways that we can grab from it.

“When you feel like quitting think about why you started!”

This is what! The decision of the two inventors of the company Jerry Yang & David Filo to walk away and give it to somebody else to run the business was the biggest slip-up that had occurred. If they really were finding the things to go on the same track and that it did not require them anymore, they could have taken a big & bold decision that time itself rather than giving somebody else the power of attorney to keep the eyes on the ball while they were still looking to play it. I mean! Why don’t you take examples of our so many big businessmen around the world Bill Gates , Steve Ballmer & so on who were there with their venture till the end or why don’t you look at the Google co-founders who are still there.

The big decisions yield bigger results if taken at the right time!

That’s what we wanted to say that was it the case that the two co-founders weren’t seeing something more coming from the venture and that if they really were not keen at keeping what they were doing they could have sold it that time itself. However in the year 2008, when Microsoft offered to acquire the company for a massive $44.6 billion amount, which was eight times of the value they have sold the company for this year, they refused.  The idea is that if they really had some plans to implement then why did they take their eyes off the ball and why not actually implemented those instead of waiting for so long and selling the company for just a few pennies.

Work on the perception that people have for you!

Believe it or not but in Marissa Mayer’s tenure, Yahoo! has acquired 35 companies till date and it’s not the company completely doomed that it had to sell itself for $4.83-billion when it was priced at $44.6 billion just a few years ago. Like we said earlier in July 2013 itself and that it’s not a very old status, the company spotted the #1 position in terms of unique visitor (196.5 million) and closely inched out the tech giant Google respectively. Perhaps! The company put all its efforts to all the big decision and overlooked the biggest component – building the right perception among the audiences, a factor that matters for any business success to a great extent. What you do and what you are achieving the each day or month must be communicated to the audiences well and that if you will it to the world to grasp themselves & understand, then let me tell you it’s business and not love. Your reckless abandon approach may work in love but not in a business! Your consumers need to be conveyed and reminded about how good you are and you well you are performing.

Your Unique Selling Point must be unique and not generic

Don’t you think it’s better to be great at something than being good at everything! Let’s say Facebook, everyone knows it is the most happening social media site, or say Linkedin, it helps you get a better job, Instagram, a social network dedicated to share photos,  all these company have a very unique ‘unique selling points’. So you being a business owner really need to think well about what is that your services are great at currently! If you talk about Yahoo, answering the question at present will difficult as to what is it great for as such. And! Even if you are disposing your venture I mean selling it off think about why would someone buy it and your answer will decide about the bid that you are going to get for your venture. Make sure you know very well what you are going to be known for through your business, what you specialize in and communicate that to your audience well!

Never give up! Take big decisions at the right time! Build the positive perception about you in your audience! Work hard & smart on your USP!

Your posting really sthtigraened me out. Thanks!