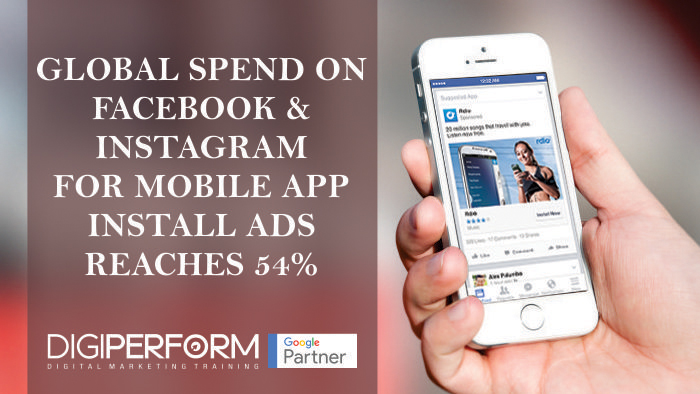 According to a recent research conducted by Kenshoo marketers worldwide are spending 54% more on Facebook & Instagram ads for driving mobile app installs. Mainly, video & carousel format ads are helping them in generating a 95% increase in total clicks. Kenshoo’s third Mobile App Advertiser Trends Report also revealed that the lift in spend & clicks on social mobile app install ads is due to the wider adoption of carousel format ads to a certain extent. The carousal format ads support a carousel of up to five separate images and links. One of the other factors driving the ad spends & clicks is the increasing use of video that resulted in 42% of spend on mobile app install ads in the quarter. Both of these ad units are found to be driving clicks at a higher rate than other social ads. “Offering multiple links and images, or showcasing apps through video provides advertisers more flexibility in demonstrating their appeal to users, so it’s no surprise that we’re seeing movement towards these ad units when it comes to app installs,” said Chris Costello, senior director of marketing research for Kenshoo. “What’s more, these ads can facilitate greater interaction with users, driving clicks that are then opportunities for apps to be downloaded and integrated into people’s daily routines.”

The click-through rate for app install ads has increased by 4% YoY in Q2 reaching its highest point in five quarters and the reason behind this rise is the quick increase in the volume of clicks. However, at the same time there is a drop in cost per click (CPC) and cost per thousand (CPM) by 21% and 18% YoY respectively. According to the Kenshoo’s study, a “reactive” seasonality is observed in spending on mobile app install ads on social channels, with lower spend in Q4, when the main focus is on retail and product ads in the holiday shopping season. However, with retail ad spend dropping off there was a lift in spend on mobile app install ads in Q1, especially in January. Following an inverted pattern for these reasons only, the CPC and CPM of these ads exhibited a rise in Q4 and then trended downward in Q1 and Q2. Rob Coyne, Kenshoo’s managing director for EMEA, said: “The report illustrates how app marketers are growing more confident about spending on social app ads to drive installs, and are increasingly comfortable using newer formats such as carousel and video to attract engagement and installs. It also underlines the big role played by the gaming sector in social app install advertising.” Kenshoo’s global study of the spend & performance of mobile app install ads during the second quarter of 2016 is based on a sample of over 25 billion impressions, over 250 million clicks, and over $100 million in total paid social spend, spanning 28 countries You can download the full report from http://kenshoo.com/mobile-app-trends/.
-
1
Share on Facebook Share on twitter

I was really confused, and this answered all my quinteoss.