Online ads should be on screen for 14 seconds to be seen: Report 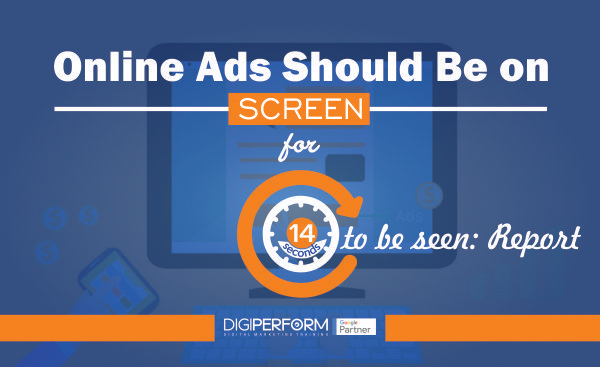 -
0
According to a recent study conducted by InSkin Media, Research Now and Sticky on the link between viewability, gaze time, ad clutter and people’s ability to remember ads an online ad should be there on the screen for 14 seconds to have any chance of being looked at. The report was based on the reserach conducted among 4 companies inlcuding nearly 4,300 consumers and involved technologies such as eye-tracking (by Sticky) and viewability measurement (by Moat).

The Major Highlights of the Reports:

Viewable vs actually looked at

The study found that if an ad needs to be viewable for 14 seconds if it to be looked at for up to a second. It also found that the ads that achieved at least one second of gaze time were viewable for an average of 26 seconds and that if you want your ads to have at least two seconds gaze time the average viewability should be 33 seconds while for over 3 seconds gaze time, average viewability is 37 seconds.

As revealed by the report, time spent by people looking at ads differs significantly across four key formats covered led by page takeovers at 7.5 seconds down to MPUs at 0.7 seconds.

“A campaign should be assessed in three stages: did the ad have the opportunity to be seen, was it actually looked at and what was the impact,” said Steve Doyle, InSkin Media’s CCO. “It should be judged and optimised against the last stage (impact) but the focus on viewability means campaigns are increasingly optimised against the first stage (the opportunity) which can be counter-productive to maximising impact.” “Why? Smaller formats have higher ‘opportunity to be seen’ rates as their size means it’s easier to hit viewability thresholds – but gaze time is very low. Thus, it’s optimising on low engagement and low impact.”

Impact of clutter on ad recall

As per the research, the impact of ad clutter were also found as to how long people look at ads and they remember them based on the ad clutter. The ad gaze time was found to be decreases by 37% on average across the formats in cluttered scenarios. As per the report, though the page takeover formats were not affected, there was a decrease in ad recall by an average of 20% based on clutter across the other three formats that include billboards, half-page’s and MPU’s, where  billboards were  most affected with -26%.

“Ad clutter significantly reduces the attention each ad receives. This translates into weaker recall and lower ad effectiveness,” says Doyle. “Publishers must tread the fine line between more ads which drives more revenue, on a CPM basis, or less ads which mean stronger results for advertisers and a better user experience. It’s obvious which one is most conducive to long-term loyalty from clients and readers.”

The study was based on three key elements. Research Now surveyed 4,279 UK adults (aged 18+) online, of which 696 eye-tracking records were gathered by Sticky using their webcam technology. During these browsing sessions, Moat’s technology monitored the viewability of ads. The study made use of a monadic cell design, testing four display ad formats.
Share on Facebook Share on twitter