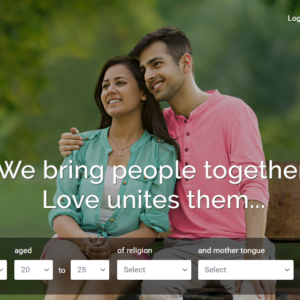 Read this case study to know how a matchmaking company that was started as an experiment became leader in the online matrimonial industry. The Brand: Shaadi.com Industry:  Matrimonial Tool Used: Social Media Marketing Result: 78 million impressions over Facebook and Twitter Business Type: B2 C

A matrimonial site, Shaadi.com was started in 1996 when Indians were hardly aware of the internet and its usage. The matchmaking company founded by Mr. Anupam Mittal claims to have made over 3.2 million matches globally till date with an overall reach of over 35 million people.

How Shaadi.com was incepted

Shaadi.com was introduced to the world when internet was not very far from the lives and that was in the year 1996-97 when Mr. Anupam Mittal planned & launched this online matrimonial site. He wasn’t feeling satiated while working as a  product manager in a business intelligence software company Micro Strategy as the work seemed a little monotonous to him. Hence, he planned to have a come back to his country though with a great plan of executing this matchmaking site. He collaborated with some 3-4 people and started working on his website venture.

How the idea popped-up?

It happened all by fluke that Mr. Mittal came across a traditional matchmaker. With an inquisitive mind, he could not stop asking the traditional matchmaker as to how he works with the idea of marriage visiting home to home and that how many people are indulged in the home to home matrimony matchmaking. And! The answer was 50-to 60! That’s when he thought how limited people are to the number of matches if they choose the traditional way of getting married. This is when it stroke Anupam’s mind and popped up the idea of launching a matrimonial website and so he conceptualized the idea and as an experiment launched sagaai.com. Since it was the only source of earning, Mr. Mittal put all his effort and money in the business. He moved to India leaving his job at Micro Strategy and changed the name of the website from sagaai.com to shaadi.com.

With a very simple & honest revenue model, Shaadi.com charges the member for a premium membership with various plans however the member can register on the platform for no charge and can hunt for various matches based on what they require. It is then when they find their preferred match; one of the two parties has to pay to get connected. A matchmaking portal that was incepted as just an experiment has now altered the whole matrimonial industry and has reached & engaged over 35 million people throughout the world recording about 3.2 million marriages across the globe. Talking about the Indian matchmaking market size, it is almost $1 billion of which Shaadi.com shares around 40%.

The matchmaking company really follows a very nice way of engaging the people by educating them and solving their issues related to Love, Marriage, Dowry deaths etc. on a regular basis. They not just try help and solve the issues but also generate awareness related to the issues that are raised through different means including social media. Considering their social media platforms, they really engage the customers well through the campaign related with social issues such as women empowerment, dowry, child marriage & so on. Talking about their offline initiatives, they have opened more than 100 Shaadi Centers in over 70 Indian cities for augmenting their customer base and user engagement. Hosting games & contest on a regular basis happens to be an imperative part of their marketing strategy for engaging customers and generating awareness among the society. Angry Bride, the famous game launched on their social media pages for creating awareness on the evils of dowry was praised by over 600,000 people from more than 35 countries. The matchmaking company also made use of ‘dowry calculator’ for highlighting social evil. The dowry calculator conveys a message to stop dowry in marriages by showing the number of dowry deaths in India.

Through #FastForHer campaign Shaadi.com tried generating awareness about the gender equality among people on its social media platforms. Fans across Facebook and twitter generating polls were asked questions related to gender equality.