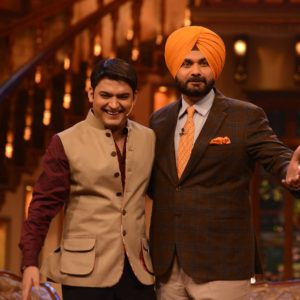 The TV show Comedy nights with Kapil has been propelling millions of Indians to laugh and forget sorrow for at least an hour. The show has made host of comedy nights a synonym of laughing. And, from last two years the show has been running incessantly. Today the show has become a platform for prominent  Bollywood celebrities to endorse their movies. So far, Bollywood celebrities such as Amitabh bachchan, Madhuri Dixit, Salman Khan, Shahrukh Khan, Deepika Padukone, Anushka sharma, Priyanka Chopra and Ranveer Singh have graced the show with their presence.
Since beginning the show was broadcast by Colors TV and still being, but now the way of watching this show have tremendously changed. Because in last one year the quality and performance of smart phones transformed completely as now news software and apps enable smart phones to function better. Therefore watching videos and movies on their smart phones have become a favorite means to pass the time.
However as today because of busy lifestyles people would like to watch the show live but everyone is to able to do so. And to reach out to larger mass, what else could be pertinent than digital media? This is the space that comedy nights with Kapil team has trapped. At present comedy nights of Kapil sharma has large following on each social media channel. On Youtube comedy nights with kapil is amongst most popular and watched channels.
Along with TV kapil sharma of comedy nights has preserved his audience with definite use of across social media channels. Or instead of losing his present viewers he gained new viewers via social media. If got seat in metro 3 out of 10 people watch comedy nights with Kapil. Somehow his team has touched the chord of millions.
Earlier there were many comedy shows on tv in India like comedy circus and the great laughter challenge came in but due to same concept or remain same for longer period of time they all failed to meet up an anticipation of the people. While comedy nights with Kapil marketing strategies changed with time.

The goal was to put videos on social media platforms like youtube is to interconnect it with other prominent social media channels so that large youth could be tapped. Even people of all ages as they also flaunt with smart phones and distressed with busy scheduling of life. In addition before an airing of any new episode his social media team starts creating a buzz about that episode by releasing the snapshots of guests or some masti moments of that occurrence.

On Facebook, comedy nights with Kapil has got about 1.77 crore likes and still counting. Kapil sharma’s PR and social media team uses this platform to engage with existed viewers and often posts prior episodes videos for new viewers as well. It is also a prevalent  social media channel to drive viewers to your youtube channels.

For an entertainment industry, either to release a teaser of a movie, song or any launch video, it is the most preeminent channel. When it comes to Kapil Sharma of comedy nights with kapil, his popularity was always there but what he has done is, used digital platforms to reach out to those people who wish to watch his shows but somehow unable to take out time of their busy schedule to watch out on TV, so through this platform now people enjoys his episodes even while travelling in cars, buses and metro. In addition comedy nights with kapil youtube gets nearly a million views and more than million subscribers.

Not only on Youtube but also comedy nights has strong presence on twitter, and which is strategically and wisely used to push traffic to official youtube channel of comedy nights with kapil.

Furthermore, there are websites that provide free comedy nights with kapil download and hence it could be said that other than TV, the Kapil sharma’s comedy nights has created a niche in online world as well.
Conclusion
However it may be stated that amalgamation of TV and online media has kept the show’s aura still alive even after two years. Of course Kapil sharma presence really does matter otherwise people get bored of same comedian performing same thing and this you might have seen with comedy circus and the great Indian laughter challenge, because despite of being seasonal shows they could not remain in market for long time. Whereas comedy nights of Kapil is a not a seasonal shows it has been running continually since 2013. But yes, with the pertinent  use of digital media the show has not break the chord with its audience. Earlier there were shows like Kyon ki saas bhi kabhi bahu thi or Kahani ghar ghar ki went on live for almost half decade. Now let’s see for how long comedy nights remains live as Kapil sharma’s movie Kis Kisko Pyaar Karu also going to knock the theatres in September.