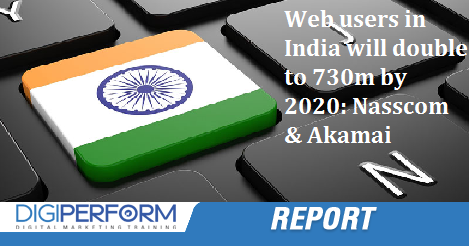 -
0
As revealed by the figures from a recent report ‘The Future of Internet in India’ generated by Nasscom and Akamai Technologies the number of web users in India will double to 730m by 2020 compared to 350m at the end of 2015, driven by rural take-up. It means that internet user base in India will be the second largest after China. However, the number of global internet users will reach a mark of 4,170 million by 2020, as predicted by the report. According to the study, India will remain the fastest growing market in the world outstripping the US. However, it was also found in the study that 75% of the new Internet users in India will come from rural areas and that a majority of new users will be consuming data in local languages. “India’s Internet consumption has already exceeded the US to become number two globally…By 2020, the Internet is expected to penetrate deeper in hinterlands of the country, helping create more opportunities for everyone,” Nasscom President R Chandrashekhar said. “The rapid growth of the Internet and its expansion into verticals including e-Commerce, Travel and Hospitality, Public Sector, Financial Technology and Media is a clear indication of the state of things to come,” he added. The report also talked about how the growth of the Internet has effectively created a strong ecosystem for new businesses that can easily tap into growing markets and create solutions for addressing their demands. “The start-up ecosystem in India, coupled with the government’s initiatives make the Internet accessible to every citizen across the country, is helping India set the stage to enable large numbers of ‘netizens’ to reap the benefits of the Internet. With the rise of digital natives and the increased adoption of smartphones, Internet penetration in India will stretch beyond the large cities, as more services and devices come online. This is also a great opportunity for enterprises to harness the power of the Internet to innovate and scale operations,” said Mr. Sidharth Malik, Vice President and Managing Director, India, Akamai Technologies.

The future of Internet Report: Projections for 2020