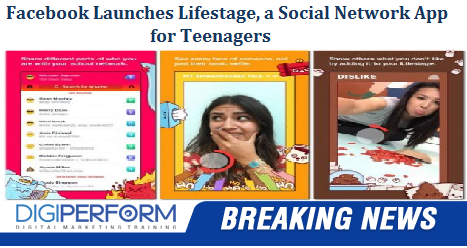 -
1
Seems like Facebook wants to leave no stone unturned in reinforcing its dominance in the social media & networking world!    The social networking giant has recently launched an iOS app exclusively for teenagers.  Targeted at a section of audience comprising high-schoolers, Lifestage will allow the users to connect with their classmates. Almost similar to the concept of the social networking site being exclusive only to college student back in the year 2004, Lifestage is only meant for students below the age 21. Anyone who is above this age will only be able to download the app and create a profile however they will not be allowed to view any other profile apart from their own. A video based app, Lifestage allows users to shoot a video with sad or happy faces, or even dance. With the help of the app, they can pile up the video snippets into longer-form video that can be used as the main profile video, as reported by NextWeb.

“Lifestage allows people to build a profile made up entirely of ‘video fields’. It allows them to show others who they are and to find out more about the people in their school community as well as meet new people. Facebook started out in 2004 as a platform for sharing who you were within your college community. From there, the massive expansion of the Facebook platform grew,”  said the app developer Michael Sayman in his Facebook post.
Social Media Marketing
Share on Facebook Share on twitter

At last! Someone with the insight to solve the promelb!