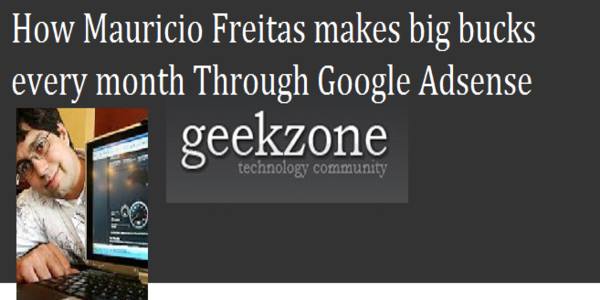 The Story: A side business to a full-fledged entrepreneurship

Getting 500,000 unique visitors every month!

Mauricio Freitas who is a young entrepreneur from Wellington, New Zealand launched his website ‘www.geekzone.co.nz’ in 2003 serving as a repository of ideas. Back then in 2003 sharing content wasn’t very easy so the team at Geekzone began it by posting things they found around the Internet however later on they established a forum helping everyone to share news and discuss issues. As the name anyway signified, the website has now become a so-called a technology community serving 500,000 unique visitors every month.

The main idea behind the Geekzone team signing up for Google AdSense in 2003 was getting an advertising solution to pay their web hosting bills. Moreover, the lack of time to sell advertising as well as the difficulty in  attracting advertisers in New Zealand that had a very small market were the two roadblocks in getting any such solutions but somehow they could manage things through Google Adsense.

Turning into a full-fledged Publisher!

The income that came from Google AdSense really made a good financial sense to Mauricio Freitas making him to quit his day job in 2007. Not just that, with the site growing on & on, Mauricio began collaborating with local advertisers and running their campaigns together with AdSense through Google’s DoubleClick for Publishers. Things became much easier for them with the integration between AdSense and DFP into a single tool. The reliability that Google Adsense gave Mauricio led him to dive into a full-time publishing venture.

“We launched www.geekzone.co.nz in 2003 to be a repository of ideas. In those days it was hard to share content, and we started by posting things we had found around the Internet. We later set up a forum so other people could share news and discuss issues, and now we call the site a technology community. It serves 500,000 unique visitors a month. We signed up for AdSense in 2003 as we were keen to find an advertising solution to pay our hosting bills. Back then we had no time to sell advertising, and New Zealand was a very small market where it was difficult to attract advertisers. AdSense took care of both of those issues.  AdSense has proved to be very effective. I left my day job in 2007 because income was coming through and it made financial sense. As the site grew, we started partnering with local advertisers and running their campaigns together with AdSense through Google’s DoubleClick for Publishers. The integration between AdSense and DFP into a single tool has made our lives much easier. AdSense has been a really reliable and valuable revenue stream, and even today we couldn’t run the site without it. It gave me the safety net I needed to change my career and go into publishing full-time.”

One of the Fun Moments: freitasm Blast Off with Symantec  🙂