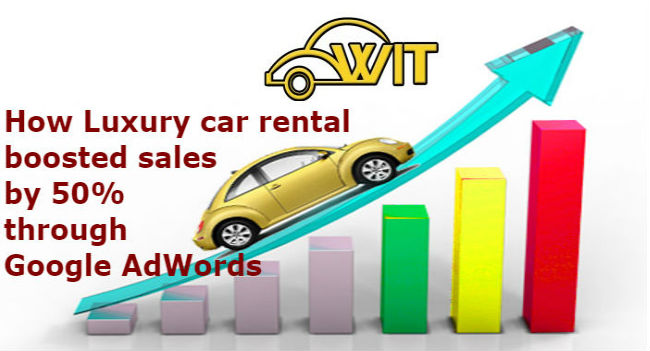 The Brand & the Story:

Established in Jakarta in 2003, WIT PT. (Wahana Indonesia Transport) is a small luxury car rental company. The car rental firm was looking to have an edge over its competitors in Indonesia. They turned towards Google Adwords for building awareness and providing the internet users with plenty of information about the company. With the help of the Adwords campaign the company was able to increase the site traffic by over 100% with 15% of PT WIT customers coming from outside of Indonesia.

Looking to have an edge over the competition

Founded in 2003 by Veronica Ratnasari, a housewife, WIT PT. has 12 staff as its employees and the company manages a fleet of 28 mid-segment & luxury cars. The biggest challenge for the car rental company was to stand out in the crowd in Indonesia where the competition amongst international car rental players was fierce.

Educating the consumers while building an online presence

Though PT WIT, Veronica was already offering a lot of flexibility in rental terms including the 24-hour customer service, still she wanted to devise & implement new ways for attracting the customers. The car rental firm collaborated with DGtraffic, Indonesia’s first Google AdWords Certified Partner, for achieving its objectives that included building online presence & brand awareness while providing the internet users with plenty of information about the car rental service at the same time. Owner of a small business that had limited marketing budget, Veronica found that AdWords not just proved to be quite effective but even cost-effective in driving drive traffic to PT WIT’s website and increasing phone inquiries & sales leads.

The way Google Adwords proved to be beneficial for the car rental company, the owner Veronica could extend her business to even neighboring countries by advertising her business there. Google AdWords boosted the traffic to the PT WIT site by over 100%. Moreover, 15% of PT WIT customers started coming from outside of Indonesia. The AdWords features such as automatic bidding helped Veronica in bringing the most clicks possible within her budget. Besides, it anyway allowed her to identify the keywords that were most popular helping her in settling on the car types & rental coverage areas to invest in. With the cost-effective success offered by Google AdWords, Veronica could expand her business into two companies: PT WIT for the mass-market, and Brysca Rent Car for the premium segment.

“Google AdWords is great for small business owners like me. My business has expanded tremendously these past years thanks to AdWords. I started only with 10 standard cars. Now I own 28 cars ranging from mid-segment models to luxurious models.”