How Kleenex boosted sales by 40% through search engine marketing 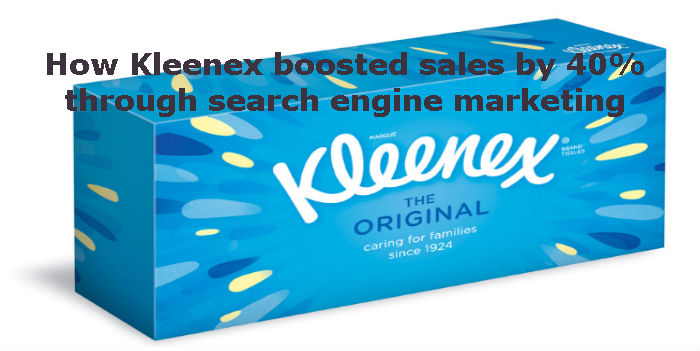 A brand name for a variety of paper-based products such as facial tissue, bathroom tissue, paper towels and diapers, Kleenex manufactures its products in 30 countries and sells in over 170 countries. Kleenex is a registered trademark of Kimberly-Clark Worldwide, Inc., which is often used as a genericized trademark especially in United States.

It happened for the first time in Kleenex’s history that the annual campaign for its Balsam – a soothing range of tissues/ balms – was destroyed in 2011. Britons usually catch colds & flu during the period from October to February. That’s the time when the brand launches its campaign. However, UK that year had the warmest October and that it was quite difficult to predict the weather. So, for saving its campaign from future ruin, Kleenex developed a unique adaptive planning strategy. The insight that today people with colds and flu see doctor later and first they go to Google helped the brand when it was in doldrums about its campaign. Realizing the fact, the brand made use of a search engine for pinpointing cities nationally with flu outbreaks, in real time. So this is how they could focus the campaign where it was relevant.

Based on the insight, the team studied the search trends on Google for about 18 months for figuring out the words related to colds & flu and. Then they compared it to other data for which they even made calls to Government health lines and visited doctors. This helped them in identifying relevant flu outbreaks, at city level, in real time. This made their campaign rather more targeted. Now, they focus exactly on cities experiencing an outbreak as it happened preventing the marketing budget from getting wasted in flu-free zones with the help of his adaptive planning tool. The use of tactical channels such as mobile and digital display helped the brand in putting across their message quickly to the target audience and catching the outbreak as it was occurring. This is how they could maximize every penny invested in the campaign.

The Success: Maximizing the investments & profits

The company created a history in the 2012 cold & flu season as 96% of their UK’s media spend reached the regions of the country suffering a live flu outbreak. Kleenex witnessed a sales increase of 40% year-on-year in the first two months. An astounding extra 432,499 boxes of tissues were sold. The experience made the brand to catch the colds easily. Kleenex could maximize investments & profits by reacting & responding to cold & flu outbreaks as they occur in the UK even when the winter was delayed – maximizing investment and profits.
Digital & Ecommerce
-
0
Share on Facebook Share on twitter