The growth of digital marketing in India! 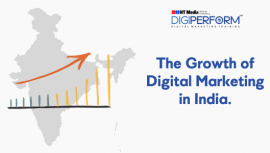 Internet access is a main-stream which has intensified the use of mobile phones, computers, and laptops. This intensity leading to a high change in the growth of digital channels both in strength and volume. Be it social media, surfing for information on Google or making purchases, India has transformed this medium into a full-fledged market. And, this market has flourished into creating Digital Marketing as a prime source of bringing business through the internet! Digital Marketing is growing at a rate of 25-40% in India annually. And, according to the Economic Times Statistics Report of internet users, India would be reaching 627 million users of the internet by the end of 2019. India also has the World’s largest Facebook population. The high-speed digitization, online portals, social media channels, etc. lead to a growth of digital marketing in a trend par imagination.

From where we began!

Door to door advertisement, word-by-mouth publicity, radio announcements, TV commercials – India always relied on traditional methods of marketing. Until the internet happened! The tools of marketing changed from humans to gadgets. It became easier to penetrate through a large segment of the audience in minimal efforts. And, as the number of laptop and mobile phone users keeps expanding, digital marketing to spreads its wings wide and far.

The earliest examples of online connectivity were demonstrated with the introduction of Michael Aldrich online shopping system. In the following years, the Thomson Holidays UK was launched, then came the IndiaMART B2B in 1996. It was ultimately in 2007 that the launch of Flipkart, an e-commerce marketing website changed the structure of marketing in India. What followed was a rise in the number of people picking up mobile phones, online shopping, at-home delivery, and internet marketing as a means to popularize the brands.

And, over the years the Digital Marketing Industry has prospered into bringing a large percent of business online with its promising ability to create a global network and flourish even the small businesses internationally.  According to the International Journal of Advanced Research Foundation, India is undergoing a golden period of digital marketing growth ever since 2013 and the trend continues till 2025 at least.

How it influences lives?

On average an Indian spends about 4-5 hours a day scrolling through social media, emails, and browsers. The growing market of gadgets like smartphones, laptops, tablets, etc has only increased the pace of usage and penetrated the market to make it reach to a wider set of audience. The content on the internet influences the lives of people big time. Display of ideas through images, videos, texts, etc has a sound foundation into the minds of the people which translates into their living. Digital marketing is very much about influencing the audience online with mediums of content to increase a brand’s impact over the audience. The amount of time spent by the people on the internet empowers digital marketers to create impactful strategies to influence consumer behavior. The right strategy converts the audience into sales. As per 2019 stats, the digital marketing industry in India is worth $68 billion! Additionally, advertising via mobile phones and tablets rose to 200 percent, that is $6 billion and Moreover, India has 110 million mobile internet users of which 25 million are in rural areas.

From 69 million online shoppers in 2016 and more than 100 million in 2017, India has seen a stark rise in the internet population. Ever since the launch of Digital India in 2015 as an initiative to improve online infrastructure and digital empowerment, there has been mushrooming of a complete market of start-ups, services and more than connect people globally! It has resulted in a rise of active internet users, mobile connections, social media traffic and more.

The emergence of digital marketing agencies and professionals

Digital marketing has become a genre of business. With more number of businesses opting to create a brand image online and reach out to the audience globally, the technicalities around the internet are also increasing. Websites, blogs, marketing campaigns, SEO strategies, etc have penetrated deep into the metrics of the technicality that influences one’s presence on the internet. As a result, it takes some well-equipped experts to create a social standing for a brand. Over the past decade, the digital marketing agencies and professionals with deep insight into the field have emerged to cater to the needs. With sound skills, imaginative minds and par excellence knowledge of what shall work for a business online – these experts are the flag bearers of digital marketing.

The role of experts in digital marketing

Digital marketing is a big umbrella under which the technical, as well as non-technical skills to create a wave of popularity over the internet, is covered. The industry has created a variety of 28 job roles for individuals to seek employment and display their talents. There is a huge scope of career in digital marketing.  As per the top job portals of India, there will be 60-65 lacks digital jobs predicted by 2025. At present, on Naukri, there are around 3,01,062 jobs listed, on Monster around 69,119, on Shine around 2,56,234 and on Timesjobs around 2,72,321 job options.

It takes experts from the field of web designing, web development, social media consultants, brand consultants, content writers, graphic designer, artists, etc., to come together and collectively work towards creating a visual representation of ideas that is easy to plant into the minds of the audience. As the industry grows, the demand for creative experts in the field is rising too generating more employment in India and making India a hub for IT activities.

What the future holds for digital marketing in India?

The return on investment for businesses through digital platforms has exceeded than that from real-life platforms. Companies are today shifting towards a more digitally empowered set-up to make the most of the golden period of digital marketing that India is witnessing. About 70-80% of the population is dedicated to making purchases online, and e-commerce websites like Flipkart, Amazon, Myntra, etc are making waves with their influence over the market. And, all of it in a country that still has about 2/3rd of the population with no access to the internet or smartphones. As the access to the internet over a larger population rises, India is to witness a revolution in terms of digitalization that will soon make India as one of the top markets in the world with the highest numbers of internet users.  Online podcasts, web stories, entertainment, sports, business, social awareness and career in India gets more dependent on digital platforms for generating revenue, sharing information and country’s progress. Digital Marketing is becoming a promising industry with rapid career growth, increasing influences, and widespread activities!

Riddhi Chhabria is the founder of All Stars Digital. A digital marketer, wearing entrepreneurial shoes and paving the path as a consultant, always on the lookout to fill potholes with the rocks of progression.
Digital Marketing growth of digital domain in India
-
0
Share on Facebook Share on twitter